“We trust the deepest part of ourselves, whatever comes out has value, My recovery was becoming in touch with my authentic self.” These words were spoken by Catherine Penney at as recent seminar. Catherine stood before us as a testimony to the human spirit. She had, as a teenager overcome three years of nearly complete withdrawal from the everyday world. During those three years she had barely talked, rarely moved and kept her eyes closed. With Dr. Dorman as her guide she had gradually returned to the world, She opened her eyes one day, looked around and said to Dr. Dorman, “I’m now ready to rejoin the world.” She went to school and has worked as a nurse for 27 years. 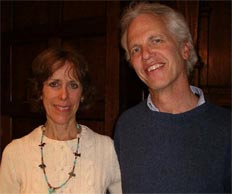 Then Dr. Dorman reflected on his perspective of their therapy, “ Though Catherine was often sitting silently in sessions…her self was evolving as we sat….it was a way of developing her sense of self.”

These words jogged my own memory of my recovery from psychosis. I realized that I had kept my true self hidden from the world because I didn’t feel safe to express who I truly was. After their talk, I told Catherine how inspiring her story was and I asked her if she recalled having an inner conversation just before she decided to return to the world of everyday life. I told her the conversation I recalled having with one side of myself saying, “Come out into the world with other people,” and my deeper, frightened self saying, “I will only come out when I feel safe to be myself.” Catherine’s already luminous eyes grew wide as she recalled that she had had a similar conversation with herself. She then went on to recall how vital direct, truthful communication was in her being willing to return to the world. She turned to Dr. Dorman and said, “Do you remember the card I gave you at the end of therapy?” He wasn’t sure. She said, “It was the king of spades, and I gave it to you because you always called a spade a spade.”

In addition to working as a psychiatric nurse, Catherine is also a flamenco dancer and facilitates expressive movement workshops at a local holistic health spa. Catherine finds creative expression to be an important part of her life and encourages others in her area to utilize their gifts. Referring to the many people she has met who have also recovered from schizophrenia, Catherine reflected, “Each person’s journey is so individual. You can’t compare; you just honor it.”