Consulting to the Mental Health Community in Northern Ireland,
Nov 12-13, 2004 By Daniel Fisher

I had an excellent opportunity to bringing a message of hope and recovery to Northern Ireland on Nov. 12th and 13th. The users (their name for consumers), carers (family members in US), providers and administrators were eager to hear that recovery can and does occur for most people with mental illness. They especially appreciated the message of hope that I carried. Hope is vital in healing from fear and Northern Ireland is slowly emerging from 30 years of the trauma of a frightening civil war. They said that my messages of recovery and hope came at just the right time in the cultural transformation they are carrying out. The passion and enthusiasm of these people crossed all the usual divisions in the mental health world. The strong spirit of these people is palpable and itself inspiring. We in the US can learn a great deal about courage from them.

In early fall I had been contacted by Dr. Mary McLean. She had been searching the Internet for new approaches to mental health. She had been frustrated by how little traditional mental health was doing for her relative. Mary encouraged Dr. David Bamford, Chair of their mental health review to invite me to conduct a conference. In short notice, Judith Lee, the Director of Education for the Northern Ireland Association for Mental Health, organized an all day conference attended by over 100 members of the mental health community at the Wellington Park Hotel, Belfast, Northern Ireland. The title of the conference was, “Recovery is for Everyone.” The two major segments of Dr. Fisher?s presentation were, ” How a Recovery Approach Improves Clinical Practice,” and 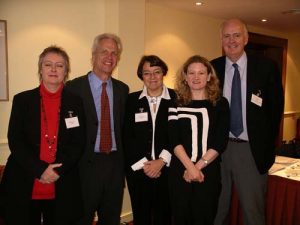 “From Maintenance to Recovery: How Consumers are transforming the Mental Health System.” Dr. Bamford felt that the emphasis on recovery was timely because the Northern Ireland Mental Health Review Committee had just released their report to the government. The Review emphasized the importance of users and carers working in partnership with providers, of a shift of more of their care to the community, and of empowerment and humanism playing a more central role in the caring process. The following day, I facilitated a group discussion by 30 user and carer leaders of the issues raised the previous day. The group was readily able to reach common understanding and recommendations. There was general agreement that user-run services should have high priority, that users and carers generally have more insight into the problems people labeled with mental illness face than most professionals, that there is too much emphasis on medications, and that these problems have more to do with the relationships between people and their environment than their biology. The recommendations the group reached were:

In the end most of the group wanted me to return to Northern Ireland to assist in their transformation to a recovery-based society. It feels like a new sun is shining in Northern Ireland and a rainbow is appearing from the years of conflict. Is it too grandiose to think that a small group of dedicated users and carers can not only help individuals with mental illness recover but through the principles of recovery help the community as a whole heal? I look forward to helping with recovery and healing in the community.