On February 25, 2006, Dr. Fisher presented a keynote address and two workshops to the staff of Value Options in San Juan, Puerto Rico. CEO Marina Diaz had appreciated his presentation in May, 2005, and wanted to ensure more psychiatrists were in attendance. This cross-cultural experience was not only useful in informing the staff about the principles and implementation of recovery, but also helped Dr. Fisher learn more about recovery. 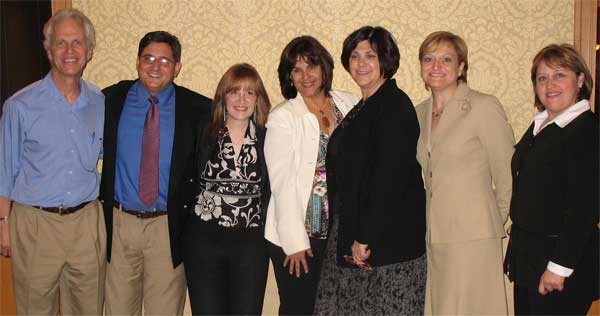 In the movie “Lost in Translation,” Bill Murray is constantly misunderstanding Japanese culture, and as a result misses a great deal of its meaning. In contrast, Dr. Fisher’s experience in Puerto Rico helped him to find new meaning in translation. He found new meaning in his work and his life through translating the NEC recovery manual, PACE, into Spanish and through the interactions during his presentations.

Recovery does not easily translate into Spanish. Professor Aurora Lauzardo, a professional translator from the University of Puerto Rico, agreed to try. She grasped that NEC did not want to use the word “Recuperación” for recovery, because of its more limited medical meaning. She understood that Dr. Fisher wanted to impart a new concept in mental health care in Puerto Rico. In struggling for meaning, Dr. Fisher focused on the most important element of recovery, which is control over one’s life. This is also called self-determination and autonomy. It is the central principle of recovery for the consumer movement. It is the reason that coercion is reacted to so severely, and highlights the fact that trauma results whenever a person’s ability to control his or her life is blocked or interfered with. For these reasons, Professor Lauzardo translated recovery as “recobrar la vida.” This means to recover your life.

In a workshop at the end of the day, a magical moment occurred. There were about 30 non-MDs, mostly women, attending Dr. Fisher’s workshop. Many of the participants were resistant to the application of recovery to their work. The first question carried this skepticism. “How are we expected to incorporate these ideas of self-determination and empowerment into our daily practice?” Dr. Fisher spoke of training by people in recovery. He spoke of creating safe and effective environments. Ms. Diaz asked what he meant by safe and he said respectful, nonjudgmental relationships. Dr. Fisher also spoke of Ubuntu, which is an African concept of our humanness. He spoke of the need for people to treat each other with respect in order to share their humanity. Unfortunately, the mental health system often forces consumers and staff to treat each other in a dehumanized fashion.

Then a participant commented that, in the morning, Dr. Fisher had demonstrated that he practices the principles he promotes. He had been talking with another presenter while the participant was standing next to him. He turned to her and asked her name. She felt he was genuinely interested in knowing who she was. She sincerely appreciated this connection and respect.

Upon hearing and feeling how important this moment was to her, Dr. Fisher reached inside, asking himself where he learned the importance of deep human connection. He realized it was at the heart of his recovery. He recalled that during the days and weeks of his second hospitalization he gazed through the grated windows at his lab across the street, asking why he was in the hospital again. What did he do to get there and how could he get out and stay out? He realized that in recent years he had locked himself inside the lab day after day just as he had locked his feelings inside. But he knew this was not living. He knew he had to make a change. He looked inside and realized that people were more important than discovery or fame.

As he read to the group, he recalled the documentary “Bright Leaves,” which argues that smoking tobacco extends time. In a similar fashion, when taking mescaline or other mind-altering drugs, time and space can expand in what is called eidetic imagery. Under the influence of mescaline, a person can look at the movement of a lit cigarette as it is moved in a circle in darkness and see the entire circle at one time. This is a clear alteration of perception, in which time appears to expand, and leads to an expansion of consciousness.

Drugs are an artificial route to what may be a universal wish to expand time and consciousness. They are however, ultimately a disappointment, as the drug effect wears off suddenly and causes great anxiety and often terror. A more natural and lasting route to that expansion of consciousness is through deep human connection. Dan could feel the group as a whole expanding its consciousness. He said they were experiencing a present moment. While Ms. Diaz was translating the term “present moment,” he thought about her use of the word for present in Spanish: presente. He recalled his time in another Latin American country and how they would say a hero’s name and then shout in unison: “Presente.” He felt the shift in the audience as they started to join in a collective consciousness.

Ms. Diaz said that in Puerto Rico they use the same term, presente, to mean that God will be present, “haz tu presente.” This reference brought in even more members of the group. They could resonate with this aspect of recovery. It had meaning in their cultural framework. They were eager to contribute and to connect. A skeptical member was moved to share that the connection was like the chemistry between two people. You could feel the swell of connection. At the end, the skeptic said, “Daniel, Presente!”

The Spanish translation of PACE can be found at: PACE-Manual.spanish