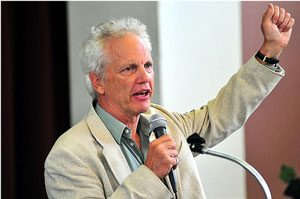 Open Dialogue* has created a great stir since its public introduction to the United States two years ago through Robert Whitaker’s book, Anatomy of an Epidemic, and Dan Mackler’s film, “Open Dialogue.” This enthusiasm has been particularly marked in Massachusetts. This is partly due to the presence of Professor Mary Olson of Smith College. Prof. Olson is the only certified trainer of Open Dialogue in the US. In 2001, she spent a year as a Fulbright Scholar at the University of Jyvaskyla where she met Jaakko Seikkula, one of its developers and a faculty member.  Already teaching dialogic-systems ideas, she teamed up with Jaakko to do a study of Open Dialogue (Seikkula and Olson, 2003).  They have continued to collaborate since (Olson, Laitila, Rober & Seikkula, in press). She is planning a pilot study of this new approach at U. Mass. Medical School.  Further, this past year, Mary established The Institute for Dialogic Practice in the Pioneer Valley (with Jaakko Seikkula, Marku Sutela, and Peter Rober) and began teaching a yearlong course on Open Dialogue to 28 peer and non-peer providers. Advocates,  a community mental health center in Massachusetts, is sponsoring 15 of its staff to attend the training. In addition, the peer-run Recovery Learning Community of Northeastern MA has been conducting introductory workshops. Though developed and practiced by professionals in Finland, this approach is extremely appealing to peers with lived experience of recovery here in the US (in our movement, there is growing dissatisfaction with the term “consumer,” because of its passivity and commercial connotation, so we are using “peer” or “person with lived experience”).

So why has Open Dialogue gained an almost viral appeal, especially among peers? One reason is the extraordinary outcomes reported in Western Lapland, Finland, by the group of practitioners.  During a 20-year period utilizing this approach, the frequency of schizophrenia in that region went from one of the highest in the world to one of the lowest (Seikkula, et al, 2006). These results were achieved by using a community-based, social network approach for young persons experiencing their first psychotic episode. I think, however, more than the treatment aspects, it is the philosophy underlying Open Dialogue, which is most appealing to persons with lived experience.  In fact, Dr. Jaakko Seikkula, one of the developers of Open Dialogue, has emphasized that it is a philosophy, not a program.

This distinction between a program and a philosophy may seem esoteric to we Americans who seem to focus on reproducible, manualized protocols. In contrast to most professions, we with lived experience have had a deep mistrust of programs such as PACT (Program in Assertive Community Treatment), which insist on fidelity to a single model. In fact, a long-term approach called PACE (Personal Assistance for Community Existence) (see Fisher and Ahern, 2001 for a comparison of PACT and PACE) and an acute approach called emotional CPR (www.emotional-CPR) have been more appealing to peers because they are based on the principles of recovery of a life. I think that an approach based on principles rather than programs is more appealing to those of us going through recovery because it allows us to exercise agency and experience empowerment. It is my conclusion that empowerment as reflected in having a voice in the decisions affecting one’s life is the most important element of recovery. Programs and protocols, on the other hand, intrinsically prevent the recipients from developing agency and empowerment.

Dialogue has slowly been gaining presence in the US in other ways. At the very time that professionals in Finland were developing Open Dialogue, peers started using a dialogical approach in the US to improve communication between groups having difficulty understanding each other’s world-views. I personally was engaged in a series of such dialogues sponsored by the New York Office of Mental Health (Blanch, et al, 1993) between professionals with lived experience and psychiatrists. SAMHSA has also carried out a series of such dialogues (www.samhsa.gov). David Bohm an eminent physicist, conducted a series of dialogues in the 80s to help all concerned gain a deeper understanding of the implicit levels of reality (Bohm,1996).

So what is the philosophy at the heart of Open Dialogue? The principles of dialogue date back to Plato, Martin Buber, and Paolo Friere. I believe the essence of dialogue is the creation of a space between people for free, mutual, and creative generation of new thoughts. According to the Finnish psychologists, psychosis is the result of a person retreating into monologue, or their own world. I can relate.

When I was experiencing retraumatization from an unsuccessful love relationship and deadening research, I retreated into complete monologue. I was so disappointed by the world of our war on Vietnam and mechanistic descriptions of behavior, that I stopped speaking altogether. I was hospitalized in Bethesda Naval Hospital and was mute for over a month. Medications did not touch my refusal to speak. In fact they caused me to retreat even deeper.  I only felt safe to emerge from my monologue when a corpsman, the lowest ranking member of the team, and I developed a nonverbal language of our own.  We created a dialogical space between us, which has been described by Dr. Peter Rober (Rober, 2005; Rober lecture, 2012) as “a space into which life can come.” This is the space that I believe our peer movement has been creating on a national scale through advocacy for recovery. Our collective lived experience has taught us that the essence of recovery is being able to live a free and fulfilling life in the community – a life in which we are the authors not the subjects of our destiny.  I would call this approach creating dialogical recovery space, which enables our life to come more fully into our lives.

These liberating life forces of dialogical recovery, however, face heavy resistance from the dominant, narrowly applied medical model. The medical approach as practiced by my father and his generation of doctors was more respectful of the patient’s participation in their healing. Without the high-powered medical technology, these humble doctors would say that doctors dressed the wound, but the person’s own powers healed the wound. I am not opposed to modern technology and medications used sparingly. In fact, penicillin, partly through my father’s research, saved my life when I was a year old. But present day health care professionals have the arrogance to think that they cure illnesses. Whether in mental health or physical health, medications can help relieve distress, but the healing ultimately must be through the coordinated agency of the person’s whole mind/body self. In mental health, this arrogant attitude leads to the imposition of a single story of so-called “chemical causation” of emotional distress on the whole society and the conviction that only a medication program is needed to correct this imbalance. I believe this model of so-called reality is perpetuating monologue, and thereby is keeping many persons in distress in their own world. I call this dominant explanation of emotional distress the “monological medical model.”

The following table shows the similarities in the principles of the recovery (Ahern and Fisher, 2001; www.SAMHSA.gov) and the principles of Open Dialogue philosophy. The table also shows how much the monological medical model contrasts with these other sets of principles:

* I use the term Open Dialogue broadly in this article to encompass both the specific practice in Tornio, Finland and adaptations of Open Dialogue in other areas of the world, which technically speaking are dialogical practices. I have used Open Dialogue to include both practices because the US audience is much more familiar with Open Dialogue than dialogical practices. Also it is beyond the scope of this paper to explain the details of the Open Dialogue practice. Therefore, I have focused on the principles of Open Dialogue, which are similar to those of dialogical practice.In conclusion, I would suggest that the shift to a recovery-based community healthcare system could be greatly facilitated by the adoption of a dialogical recovery philosophy. This would mean an infusion of dialogical principles into all facets of daily living. This might be best carried out through the engagement of all the members of society in various sized dialogues, covering a variety of topics of great concern. In the healthcare field, for instance, we need much more dialogue between persons who have lived experience with mental health, substance use, and physical health issues, psychiatrists, and medical doctors.  This much sought after integration of these separate fields is best done by the person suffering gaining a sense of their own agency. Once the person gains a voice in their life, they can carry forth genuine person centered, whole health planning.

Mackler, D. Open Dialogue. Video on DVD, can be obtained through the National Empowerment Center, www.power2u.org.