Hope and Recovery in Australia

I spent three very busy, exciting days in Melbourne, Australia, in connection with a conference on recovery. From May 7 through May 9, 2008, I was immersed in the world of the Australian consumer movement as it is gaining its voice of recovery. The conference was sponsored by a psychosocial provider organization, Vicserv. The energy and creative contributions to the conference came from us — the consumers. This phenomenon was recognized by a provider who was overheard telling another provider she was glad there were so many consumers attending, but did not come to hear them speak up so often. These providers were used to consumers being seen but not heard. Out of the 800 attendees, perhaps 100 were self-disclosed consumers. In addition there were scores of others who only felt comfortable to disclose privately to myself or other consumer speakers. They were fearful that a public disclosure would have a negative impact on their career. One such consumer/provider suggested a national day of disclosure to reduce the stigma associated with the label. 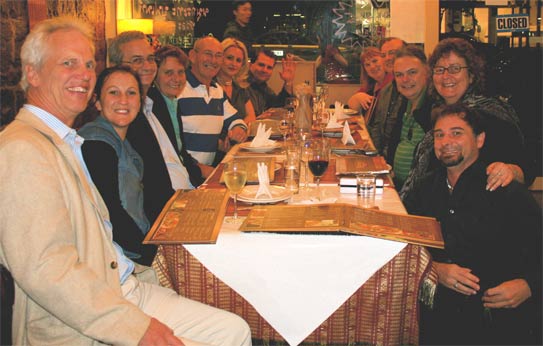 Sharing ideas and good cheer at a Thai restaurant in Melbourne

My involvement began the day leading up to the conference. I wrote a piece for the Vicserv publication, Paradigm, about the importance of the consumer voice in systems transformation. The media coordinator for Vicserv asked if I would help spread the word about the conference by going on the radio. A single spot then morphed into 3 radio contributions. I was anxious the whole day. Though I have carried out media events before, they have usually been in the United States. I didn’t feel that confident of my grasp of Australian culture and idioms.

The first thing in the morning I was interviewed live by telephone on a countrywide breakfast show on ABC, Australia Broadcasting Corporation. I shared some of my personal story of recovery and then described the work our movement has been doing in the U.S. and around the world. My next assignment was to go to the ABC studio and read an abbreviated version of my article. I actually get more anxious reading my writing than spontaneously speaking from my heart. To make matters even a little spookier, I carried out the reading in a small room called the Tardis booth. The name Tardis was derived from the name of the office of a fictional time lord, Dr. Who, who had been popular on British TV. I was intrigued, however, by the coincidence that Dr. Who supposedly had two hearts and much of my message is that recovery depends on heart to heart communication. There would be obvious benefits to this work in having two hearts.

Later that evening, I returned for a call-in live show, “Australia Talks.” This went a little better, because a consumer leader from New Zealand, Mary O’Hagan, shared the load. We were heartened that several of the callers were questioning the over-reliance on medications and looking for alternatives from those of us with lived experience.

In Australia for the Joining the Dots – Creating Community conference, Dan Fisher was interviewed on three ABC Radio National programs, May 7, 20008. Links to these radio shows are as follows:

The next two days involved being swept up in the thrilling energy of a conference where consumers were taking a lead role. The importance of consumer involvement was highlighted by the following quote that was attributed to Rumi, a 13th century healer:

“ Don’t turn away from the wound,
Keep looking at the bandaged place,
That’s where the light enters you.”

I restated this quote in my closing remarks in which I gave a society-wide version of the concept, by substituting the person humanly challenged with a mental illness for the wound:

“Don’t turn away from the wounded person,
Keep feeling their distress,
That’s where the light enters society.”

This quote highlights a theme that many consumers brought out: that our suffering needs to be seen as both a personal and society-wide lesson about healing and recovery for all of us. I sounded this theme in my keynote address. I shared the story of my own recovery, as I could see that there were still many in the audience doubting that recovery from schizophrenia was possible. I pointed out the centrality of hope: how hope needs to be carried in the hearts of everyone assisting the person who is in distress. I suggested one way to step beyond the narrow medical model was by using positive, non-technical terms such as humanly challenged in place of mental illness. There was widespread agreement that hopeful, empowering relationships would assist recovery. I also emphasized other important elements of a recovery-based relationship: trust, understanding, and above all a belief in the person. I asked people to create a recovery-based conference by treating each other with dignity, respect, and understanding despite each other’s differences. Later a participant shared that she was able to experience love when she was manic. I suggested that she might be less likely to need to become manic if she could experience more love in her day to day life. She agreed and said that was the message she had gotten from my talk, but is difficult to carry out.

In a panel following the keynote, there was extensive audience participation, especially by consumers. One of the themes was the question of power and how it is used. Some consumers feared power in the c/s movement was exercised in traditional fashion as power over. The group was interested in a new way of leading, emerging from consumers in California: participatory leadership. Participatory leadership is not new in business, yet it is new to mental health. A consumer leader in Los Angeles, California who protested being characterized as a leader originally described this style. He said he is always a peer first and leader second. This type of leadership is sharing power to work together rather than using power to be in charge of the other person’s life. This approach fits well with Australian and New Zealand peoples’ concerns with authority and the wish to walk beside rather than in front or behind each other.

The next day Mary O’Hagan, a long-time consumer leader from New Zealand, gave a brilliant keynote. She said New Zealand is transforming its MH system to a recovery-based system. She stated that recovery depends “on freedom, opportunities, personal resources, and relationships.” She does not support the medical model because it is too disempowering. She feels it takes away the person’s will because it places the control outside the person suffering. Recovery on the other hand, gives the person more control and understanding of their madness by acknowledging the centrality of context and personal meaning. She pointed to the many levels of change needed from the individual to the systemic level. She neatly summarized these needed changes by referring to Ken Wilbur’s four quadrants of existence:

Personally, I started focusing on the parallel between the meaning of madness as craziness and madness as being really angry.

Later, in my workshop on the 12 P’s of Empowerment, I found the audience agreed that there is an important connection between anger and madness. There was an agreement that the suppression of anger in one’s relationships and society often leads to madness. It seems the less powerful members of society are more likely to become mad. The less powerful members are less likely to develop a voice through using one’s own voice. This would explain why one of the first experiences when peers connect is expression of our shared anger, often because of trauma we suffered and our inability to find a safe place to express the anger. It also explains why the most important aspect of the Finding Our Voice training is transforming anger into passion. There were several who said they were angry that they could not share that they were consumers at their work. One consumer/provider said she wanted to develop a national day of disclosure.

There were several workshops on how voice hearers can learn to be less distressed by their voices. It turns out that there are many people who hear voices but their voices are not angry and demeaning. Arana Pearson and John Watkins said that when voice hearers form support groups and are able to become the author of their life story from their own perspective, their voices become less distressing. We can consider that telling your life story is an important element in developing a Voice of your own. (I capitalize Voice to mean your true Voice as opposed to your everyday voice). This gives an additional reason why gaining your true, authentic Voice is vital to recovery. It may also explain why gaining a Voice of your own decreases the distressing nature of one’s voices.

Many consumers at this conference, as in so many settings, find expressing their Voice through singing is important to their recovery. One consumer, who had survived several serious suicide attempts including self-immolation, concluded her presentation with a heart-wrenching rendition of “I Will Survive.” The song was also once played for me by a client struggling with whether to live or die. It has many haunting lines such as “ I have all my life to live, I have all my love to give…” Another consumer, Heidi Everett, concluded day one by sharing her haunting songs. She said singing and song writing were essential to her survival.

At the closing session, a strong core of consumers and providers shared they wanted to spread the lessons they learned about recovery to their work and community. Jenny Speed from Australian Mental Health Consumer Network said their organization would see about coordinating a national day of disclosure.

Many of these discussions were continued at dinner with consumer leaders from across Australia. One of the important topics was the question of what part of us is watching when we are conscious of being an I or ego in our world. This reminded me of the late Professor Richard Rorty’s work in questioning some of the classical tenets of philosophy and thought. I recalled being in a seminar with Professor Rorty in college. It was there that I first started to ask the question “who is the I behind my I.”

The consumer leaders resolved to keep in touch more often through email and teleconferencing. We all agreed there is a need to develop a larger number of consumer advocates across Australia to have a stronger voice for more effectively transforming the system.