In April-May, 2006, I gave a series of talks in Sweden, Netherlands, and Denmark. I talked but I also entered into dialogue with “users” (their name for consumer/survivors), families, and providers. This tour filled me with new understanding, which I want to share with you all. We entered into dialogues of mutuality across cultures and languages. My symbol for this sharing is found in the drawing of two hearts by a user from Denmark: 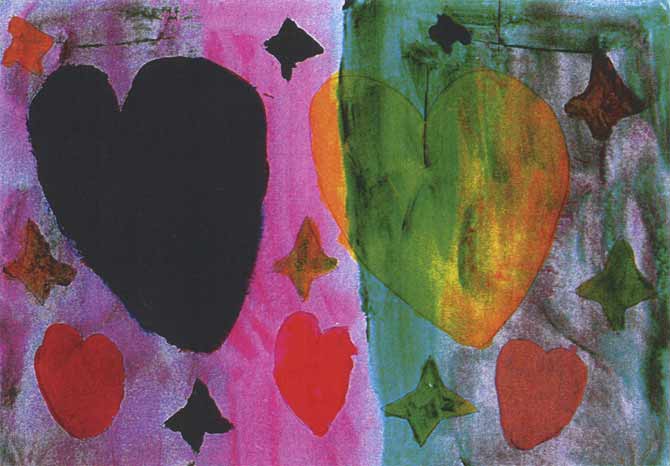 I now feel the core of recovery is as follows. Throughout our life we each pursue our development to become the unique person we deeply are. We develop this sense of ourselves through deepening emotional connections with important persons in our life. These connections provide us the light to see and feel our values and emotions. The better we know ourselves, the better we can self-direct our life based on our dreams and goals.

When we experience various traumas causing us loss of control over our lives, we suffer extremes of emotional distress. If we are unable to share these emotions with others, we develop distortions in our thinking and feeling which interfere with our expected life role. We are then at risk of being labeled mentally ill, unless we can share these extremes of anger and sadness and transform them into passion. This passion can empower us to continue our journey of self-discovery.

Through this process we learn to believe in ourselves and to accept our deepest self. To transform disturbing emotions into passion, we need to share with authentic, genuine people. These genuine people are capable of connecting with us at our heart level. Heart-felt conversations with genuine people are based on caring, trust, respect, hope, and love. These conversations empower us because they help us to believe in ourselves. In these conversations we are able to be fully present in the moment with each other enabling us both to more deeply be. The “Heart is a lonely hunter” forever seeking nourishment through love.

People in Europe resonated with this message, just as they had in Japan. The hunger seems to be universal. The need to hear a hopeful message is widespread. They resonated when I told them of the young man in Canada who shared with me that he heard voices when his heart no longer spoke to him. In a similar vane, members of the Voice Hearers Network in the Netherlands reported that telling your life story in your words to others is crucial step in relieving the distressing aspects of hearing voices.

Users in Denmark told with great enthusiasm of a Finnish model for preventing first episodes of psychosis from leading to mental illness. In remote, rural areas of Finland, far from hospitals and academic psychiatry, professionals have empirically learned how to prevent schizophrenia from developing. When a member of the community (usually a young adult) goes into a state of severe emotional distress and their reality becomes distorted, a team of professionals convene several meetings with the significant members of the person’s social network. The person in distress is always present at such meetings. Open dialogue, in down to earth language, is used to frame each person’s understanding of what has been happening within the network to lead the person in distress to respond in such a fashion. They use some of the ideas for a reflecting team developed by Tom Anderson in Norway. Such meetings allow the person in distress to remain in his or her home without hospitalization, and to require little medication. Apparently, the break in the conversations, which had caused acute distress, is repaired. This allows the young person to resume connection with the people and conversations necessary to orient him/her to reality. The recurrence rate is very low, most likely because such an approach strengthens the person’s connections with their network, rather than rupturing such connections as frequently happens in hospitalization. This approach is similar to the community healing ceremonies utilized in developing countries. The recovery rate in developing countries is much higher than in industrialized countries.

My Travels in Sweden, Netherlands, and Denmark

My journey started April 27, 2006 when I met with 60 users in Stockholm. The city is beautiful, clean, and efficient. There were bicycle lanes on nearly every road, and their public transportation was excellent. This meeting was organized by their main user group, RSMH. I shared our American version of recovery and they shared theirs. At dinner that night I learned that they are concluding a three-year commission. They are poised to embrace recovery and they want NEC’s assistance in doing so. The next day I addressed a larger audience of all stakeholders. I then had lunch with Dr. Anders Milton, the head of their commission. I shared how important recovery has become as an organizing principle for transforming the system. My wife and I also visited my daughter who was playing professional soccer. Her living and playing soccer was a great conversation opener with all Europeans since soccer is their most revered sport. I found it was often important to have such an opener as northern Europeans are more reserved than Americans.

We then traveled to the Netherlands. An expatriate nurse and users working on a recovery project through Timbros MH Research Center sponsored my trip there. I addressed audiences of users and carers in Maastricht and Utrecht, May 1st and 2nd. I was also interviewed by Margareet Muijlwijk of Psy Magazine . The article appeared in their June issue under the title, “Troubadour van de Hoop op Herstel” which translates to “ Troubadour of Hope and Recovery.” Wilma Boevnik, a member of the European Users’ Network shared their project of developing peers to be experiential experts. These experiential experts share their knowledge with other users and with professionals. Twice a year they facilitate a dialogue between users and their own professionals. This dialogue opens new conversations. For instance they are urged to share issues they have wanted to share but at that point had not yet shared in therapy.

We then flew to Copenhagen. Eric Olsen, a member of the major user group, LAP, met us. I addressed a major conference held May 3rd and sponsored by Bedre Psychiatry (Better Psychiatry) and LAP. The conference was attended by 350 users, providers, and relatives from many Northern European countries. This was the culmination of a 3-year study of what helps and what hinders recovery. They concluded that they needed a national recovery center like the NEC. I said we would be glad to assist them in its development. They did not, however, see the need for the center to be run by users.

I addressed the audience after lunch. By then there had been two lectures with no opportunity for audience participation. So a few minutes into my talk, I started asking the audience questions. I started with a favorite of mine, how do we know what is real? This question usually provokes active discussion, especially among providers, who usually are assumed to know the answer to this question. It seemed a particularly important question in Copenhagen, the city where Neil Bohr and Werner Heisenberg constructed our present theory of reality based on quantum reality. Their concept that reality is co-created by the perceiver and the perceived is deeply relevant to the mental health field. Despite the scientific validity of quantum reality, the mental health field remains mired in Newton’s mechanical reality. Many said reality is what you see and touch. Gradually, others added that reality depended on the shared perception of groups of people. The question of how we know what we know is particularly important in the era of evidence-based practice.

At dinner that night, the director of Bedre Psychiatry said they wanted to enter more into a sharing of new ideas about recovery on an international level. We discussed the possibility of a follow-up webcast between users in the US and users in Sweden. The next morning involved a full morning of dialogue with all stakeholders at a community center. They wanted to know more about empowerment and how it related to recovery. They were very interested in knowing how passion related to recovery. They do not have a word in Danish for advocate. They said the closest word they have is “forkamper” which means one who fights ahead. They do not have the idea that one can advocate for oneself. They envy the US consumers and how we speak up to professionals. That rarely occurs in their culture. They do not criticize people in authority.

Their English was generally good, but another word that did not translate was “resonate.” As a result we had to discuss the word at length, which was useful in my understanding. They could relate to the meaning of resonate which is being on another person’s wavelength or feeling another person’s vibrations. They agreed that they are more into the Descartian view of “I think therefore I am” instead of a recovery view of “I feel therefore I am.” Although when we discussed what is real, they agreed that we all need others to resonate with at a feeling level for us to experience our existence. They were also interested in knowing how people can transform anger into passion.

At lunch I learned from my sponsor, Jorn Erickson, about a progressive network of professionals in Europe, Whole /Life Network. I also learned how to eat smorgasbord Danish style. That afternoon I shared with a group of users in Jorn’s residential program. He has been introducing recovery to his facility for several years. I was very impressed by their sophistication. Their level of understanding of the need to connect at the heart level laid the foundation for the description I gave at the start of this essay. The whole discussion took off when I compared life in Brazil to Sweden. I mentioned that everyone in Brazil hugged. I noticed that it is much harder to be unauthentic when you hug than when you speak. I think when we hug we more readily express our true feelings. I also described the type of hugging practiced by the Maoris, “hunging,” and a provider from Sweden became visibly alarmed. “You aren’t suggesting we practice that here, are you?”