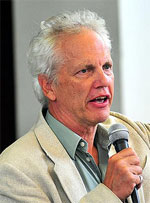 Recovery From Mental Illness and Becoming a Commissioner – Dan is a person who has recovered from schizophrenia. He was hospitalized several times prior to becoming a psychiatrist. He is one of the few psychiatrists in the country who publicly discusses his recovery from mental illness. He is a role model for others who are struggling to recover, and his life dispels the myth that people do not recover from mental illness. His recovery and work in the field were recognized by his selection as a member of the White House Commission on Mental Health.

Education and Practice – Dan received his AB. from Princeton University, his Ph.D. in biochemistry from the University of Wisconsin and his M.D. from George Washington University. He is a board-certified psychiatrist who completed his residency at Harvard Medical School. He is presently Executive Director of the National Empowerment Center and a practicing psychiatrist at Riverside Outpatient Clinic, Wakefield, MA.

Speaker/Teacher/Researcher – Dan travels to all parts of the country to conduct workshops, give keynote addresses, teach classes, and organize conferences for consumers/survivors, families, and mental health providers to promote recovery of people labeled with mental illness by incorporating the principles of empowerment. He has been featured on many radio and television programs, including CNN Special Report. In addition he is a researcher having carried out research into neurotransmitters at the National Institute of Mental Health and on the ways that people recover. Along with Laurie Ahern, he developed the Empowerment Model of Recovery and the PACE/Recovery program to shift the system to a recovery orientation. He was recognized for this work by being selected for both the Clifford Beers National Mental Health Association Award and the Bazelon Center for Mental Health Law’s Advocacy Award.

Author – Dan has written chapters in many books, as well as a number of articles in professional journals such as Hospital and Community Psychiatry and the Psychosocial Rehabilitation Journal. He has produced a video and booklet about important aspects of recovery, “Recovery is for Everyone” as well as a video on “Consumers Working as Providers.”

Dr. Daniel Fisher Igniting the Recovery of Our Humanity

Daniel Fisher is interviewed by Ann Kasper, for Portland, OR public TV, May 2017.

The recent tragedy in Arizona has prompted the media to once again falsely equate mental illness with violence. The following review of carefully conducted studies shows that persons with mental illness are no more

During a recent dialogue training, Dr. Peter Rober, from Belgium, said, “listening deeply, going beyond categories, creates dialogical space in which life can come… into this space will come life and super reality.” It

Lynne Malcolm interviews Dan Fisher on Emotional CPR. Her show, called All in the Mind is described as RN’s exploration of all things mental—a program about the mind, brain and behaviour, and the endlessly fascinating

Inspiration and Recovery in Iceland and Ireland, May 2010