Skip to content
Home/Book Reviews/The Epidemic of Mental Illness: Why?

The Epidemic of Mental Illness: Why? 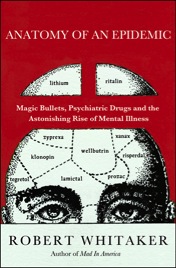 This powerful piece in the New York Review of Books covers:

Anatomy of an Epidemic: Magic Bullets, Psychiatric Drugs, and the Astonishing Rise of Mental Illness in America, by Robert Whitaker

Unhinged: The Trouble With Psychiatry—A Doctor’s Revelations About a Profession in Crisis,
by Daniel Carlat

It seems that Americans are in the midst of a raging epidemic of mental illness, at least as judged by the increase in the numbers treated for it. The tally of those who are so disabled by mental disorders that they qualify for Supplemental Security Income (SSI) or Social Security Disability Insurance (SSDI) increased nearly two and a half times between 1987 and 2007—from one in 184 Americans to one in seventy-six. For children, the rise is even more startling—a thirty-five-fold increase in the same two decades. Mental illness is now the leading cause of disability in children, well ahead of physical disabilities like cerebral palsy or Down syndrome, for which the federal programs were created.

A large survey of randomly selected adults, sponsored by the National Institute of Mental Health (NIMH) and conducted between 2001 and 2003, found that an astonishing 46 percent met criteria established by the American Psychiatric Association (APA) for having had at least one mental illness within four broad categories at some time in their lives. The categories were “anxiety disorders,” including, among other subcategories, phobias and post-traumatic stress disorder (PTSD); “mood disorders,” including major depression and bipolar disorders; “impulse-control disorders,” including various behavioral problems and attention-deficit/hyperactivity disorder (ADHD); and “substance use disorders,” including alcohol and drug abuse. Most met criteria for more than one diagnosis. Of a subgroup affected within the previous year, a third were under treatment—up from a fifth in a similar survey ten years earlier.

Nowadays treatment by medical doctors nearly always means psychoactive drugs, that is, drugs that affect the mental state. In fact, most psychiatrists treat only with drugs, and refer patients to psychologists or social workers if they believe psychotherapy is also warranted. The shift from “talk therapy” to drugs as the dominant mode of treatment coincides with the emergence over the past four decades of the theory that mental illness is caused primarily by chemical imbalances in the brain that can be corrected by specific drugs. That theory became broadly accepted, by the media and the public as well as by the medical profession, after Prozac came to market in 1987 and was intensively promoted as a corrective for a deficiency of serotonin in the brain. The number of people treated for depression tripled in the following ten years, and about 10 percent of Americans over age six now take antidepressants. The increased use of drugs to treat psychosis is even more dramatic. The new generation of antipsychotics, such as Risperdal, Zyprexa, and Seroquel, has replaced cholesterol-lowering agents as the top-selling class of drugs in the US.